The heavily-forested southeastern U.S. is home to some of the highest concentrations of biogenic volatile organic compounds in the U.S., which interact with pollution from power plants and vehicles to impact regional air quality (i.e. the ‘blue haze’ seen in summer months-Figure 1), meteorology, and ecosystem health. The resulting haze may have contributed to the region’s lack of warming during the 20th century. The effects of improved regional air quality during the past two decades on regional weather, climate, and ecosystem health necessitate long-term measurements from regionally-representative sites, such as those at high-elevations away from urban sources However, there are few (and in some cases, no) mountainous sites in the U.S. with sufficiently comprehensive long-term datasets needed to improve climate and air quality models. 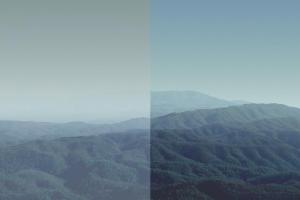