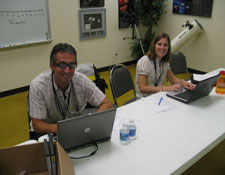 The 21st century may become known as the Climate Century, yet the majority of citizens do not have a basic understanding of the dynamics of the atmosphere and climate processes. Many educated adults struggle to comprehend such basic relationships as that between Earth.s seasonal changes and the tilt of the planet on its axis, or between the role of atmospheric carbon dioxide in developing tree mass and the effects of its odorless release when trees are burned. Despite recent films, television programs and publications about human impacts on the climate system, many people still inaccurately associate the problem of global warming with the hole in the ozone layer. (NOAA, 2007). The urgency of the changing climate demands a greater understanding of our climate system, not only by the leaders of today, but by the scientists, policy makers, and citizens of tomorrow.

In direct response to a need for greater scientific literacy with respect to climate science, we have established the Climate Action Network through Direct Observations and Outreach (CAN-DOO). NASA has led the charge in climate science through long-term observations and computer simulations of the global climate system as well as through their portfolio of education and outreach programs. CAN-DOO complements the NASA Science Mission Directorate (SMD) education and public outreach portfolio by promoting public awareness of climate science and by introducing various levels of Science, Technology, Engineering, and Mathematics (STEM) principles to homeschooled students, local public school students, and undergraduate students through hands-on, problem-based climate science activities. 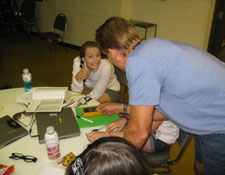 The specific objectives of CAN-DOO are as follows:

Grandfather Mountain International Biosphere Reserve (GMIBR) attracts hundreds of thousands of visitors annually. In partnership with GMIBR, we are promoting climate science awareness through Citizen Science activities, interactive public displays, and GMIBR staff training. These activities allow the general public to become engaged in climate science by .seeing. how their regional climate is changing and what impact this may have on their everyday lives.

In order to have a future workforce capable of comprehending and addressing the changing climate, we must attract and retain students in STEM disciplines. The CAN-DOO project takes a novel approach to engaging students by involving them in the entire scientific investigative process as applied to climate science. Local elementary and middle school students, homeschooled students throughout North Carolina, and undergraduate students in the new Global Climate Change course and Chemistry, Geography, and Physics courses at Appalachian State University (ASU) are being introduced to instrument assembly and calibration against NASA research grade instruments, data collection, and data analysis. Results are placed in the proper context via comparisons with NASA data products and local research-grade measurements made at ASU as well as with online weather and climate models.